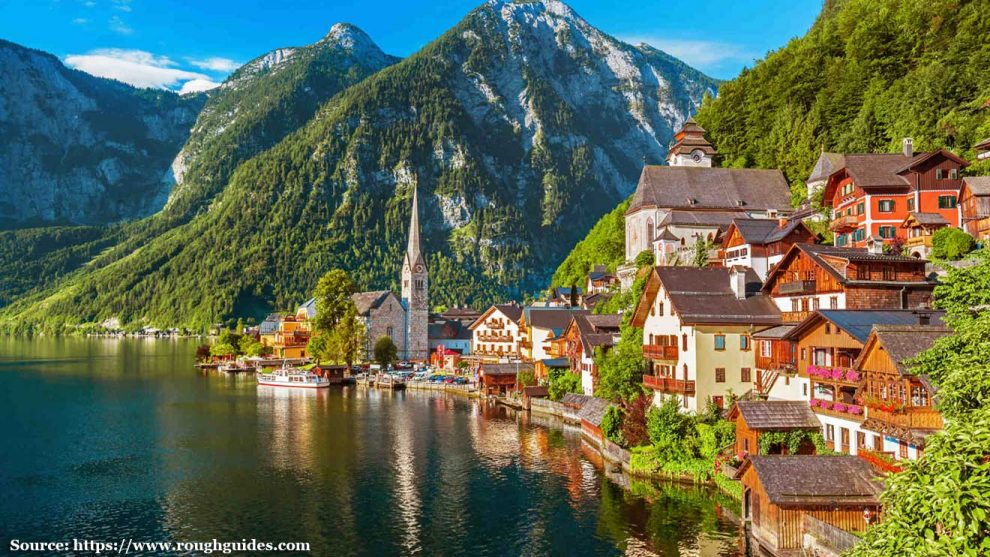 Travelling to different countries in Europe on a single visa and with no extra cost for entry is possible. Yes, you read it right! If you are a travel enthusiast and want to visit European countries hassle-free, then Schengen Visa is the first thing you should obtain. With this visa, you can move freely between countries in Europe. There are around 26 countries to which you can travel using Schengen Visa without any halt.

Here we are about to explain the top 5 European countries and their ultimate attractionsthat one should visit in Europe. You will surely enjoy one of the best life experiences here. Let’s talk about them:

Stationed in Vienna, this Baroque-style palace was once the summer residency of the royal family. It has 1,441 rooms as well as elegant gardens that highlight a maze, an orangery, and several greenhouses.

Tucked between the Hallstätter See and the Dachstein mountains, Hallstatt is Austria’s oldest village. Since ancient times, it has been recognized for its production of salt. Visitors to the area can check out its breathtaking scenery and subterranean Salt Lake as well as see the mummy of an ancient miner conserved in salt.

The Kahlenberg is a 1,588-foot mountain positioned in the Vienna Woods that grants a glimpse of the entire city of Vienna. At the highest point is the Stefaniewarte viewing tower.

“Kahlenberg is a classic example of Austrian nature, blended with a couple lovely and cozy classical Austrian cafes on the end station, which makes it a supreme place to visit in the early autumn or spring!”

Take a ride up the Jungfrau railway to Jungfraujoch railway station—the highest railway station in Europe, located at 3,454 meters above sea level in the Bernese Alps. From there, you can move towards the Sphinx Observatory to take in the magnificent views from what is known as the “Top of Europe.”

This city in German-speaking, central Switzerland, is a famous destination for those wanting to feel its beautiful lakeside atmosphere. It is house to the oldest wooden covered bridge in Europe, the Chapel Bridge, which was constructed in 1333 and stretched 670 feet beyond the Reuss River.

The only canton in Switzerland where Italian is the single official language, Ticino has a Mediterranean ability that you won’t see elsewhere in the country. Positioned in southeastern Switzerland, the region usually enjoys warmer temperatures than the rest of the country and about 600 more hours of sunshine per year opposed to Zurich.

“Being smack bang in the center of the Alps, Switzerland is almost 60% mountains. So, if you love magnificent scenery, the outdoors or outdoor sports, this is the place to come.”

Tivoli Gardens is a famous amusement park situated in Copenhagen. Established in 1843, it is the second-oldest running amusement park in the world. The oldest, Dyrehavsbakken, is also settled in Denmark.

Bornholm is a Danish island positioned east of Denmark in the Baltic Sea. Visitors can walk beside the granite coastline, experience regional delights and majestic scenery, and explore the island’s unique round churches.

Denmark’s Legoland, inaugurated in 1968, is the original Legoland park. Visit Mini-Land to see 1:20 scale models of popular sites in Denmark and other parts of the world constructed using tens of millions of Lego bricks.

“JesperhusFeriepark is a park filled with an extensive range of flowers, in all colors, that are usually lined up in creative patterns as well as sculptures. Honestly, spending a summer day there in the sun is incredible, and the pictures you get are brilliant. It’ll be a fun and pretty summer day.”

If you discover yourself in Estonia’s capital, Tallinn, you’ll want to ensure you visit its Old Town. Regarded to be one of the best-preserved medieval cities in northern Europe, it is occupied with churches, barns, warehouses, and cobblestone streets from the Middle Ages.

A hidden gem in the southern Estonian forests, this town highlights scenic views, castle ruins, and a nearby lake and beach with boat rentals. It’s also the house of the Viljandi Folk Music Festival, held each year in July, as well as several other festivals and fairs.

Its name means “land of bogs,” so it’s no shock that 80% of the region is made up of marshlands. Soomaa is known for its “fifth season,” which is the time of year in the spring when water from melted snow and heavy rain flood all the lower forests and roads. Visitors can travel on foot as well as by canoe.

Estonia’s low-price accommodations and cuisine make it the ideal destination for budget-conscious travelers.

Finland is one of the greatest places on earth to see the northern lights, as they are visible on all clear nights from about late August to April. If you’re not adventuresome enough to try your hand at cross-country skiing or snowshoeing, there are loads of hotels and other accommodations where you can calmly enjoy the lights of Aurora Borealis.

Santa Claus Village resides about 8 km northeast of Rovaniemi—the official hometown of Santa Claus. Visitors to the village, which is open every day of the year, can meet Santa in his office. They can also explore attractions such as Santa Claus’ Main Post Office, the Arctic Circle Husky Park, Santa’s House of Snowmobiles, and Snowman World. In the winter, reindeer rides are also available.

The Arctic Circle cuts right by the village, signified by a white line where visitors can officially enter the Arctic.

Made up of about 20,000 islands and skerries, the Turku Archipelago is one of the largest archipelagos in the world in terms of the number of islands. The Archipelago National Park encompasses much of the area. The occupied islands can be reached by ferry, and some are available by bicycle.

“Naantali is placed a bit west from Turku. It is a tourist destination in itself because it’s a remarkably nice and romantic small town and Moomin World is there. However, it is recommended to walk up to the cliff of Kuparivuori to see the boats coming in the city and feel the wind. The city also has many good restaurants located at the pier.”

If you want to know more about travel destinations that do not cost you a fortune, then stay tuned with us by subscribing to our newsletter. We are updating more posts in the near future. Also, share your views and suggestions in the comment box below!