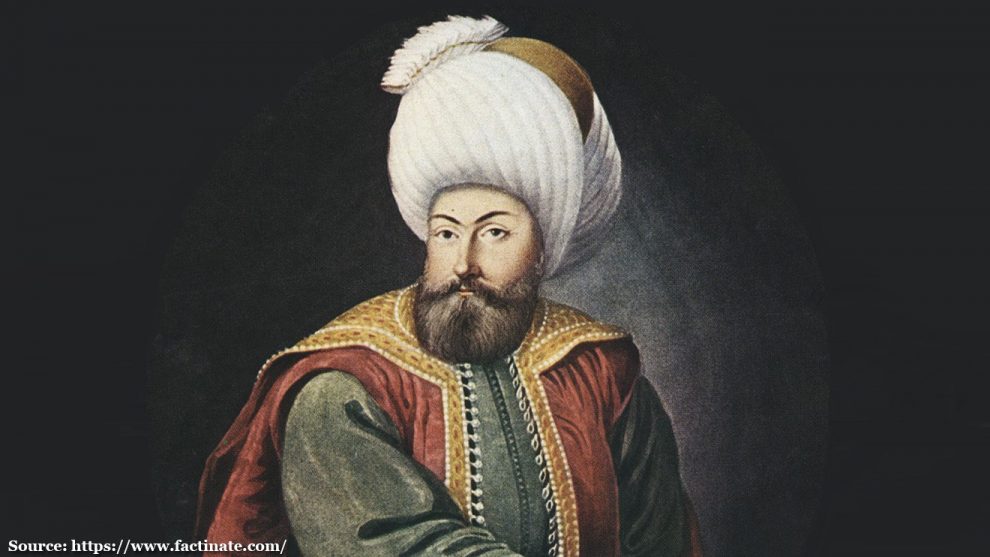 Osman I or Osman Ghazi, also represented archaically as Othman, was the leader of the Ottoman Turks and the founder of the Ottoman dynasty. The family line bearing his name later built and ruled the Ottoman Empire (first recognized as the Ottoman Beylik or Emirate). This state, while only a small Turkmen territory during Osman’s existence, converted into a world empire in the centuries after his death. It remained until shortly after the end of World War I.

Due to the lack of historical references dating from his lifetime, very little accurate data about Osman has persevered. Not a single written source remains from Osman’s reign. The Ottomans did not document the history of Osman’s days until the fifteenth century, more than a hundred years after his death. Due to this, historians find it very difficult to differentiate between fact and myth in the many accounts told about him.

*One archaeologist has even gone so far as to claim it impossible, describing the period of Osman’s life as a “black hole.”

According to the succeeding Ottoman tradition, Osman’s ancestors were descendants of the Kayı tribe of Oghuz Turks. The Ottoman territory was just one of many Anatolian beyliks that appeared in the second half of the thirteenth century. Resided in the region of Bithynia in the north of Asia Minor, Osman’s state found itself exceptionally well-placed to launch attacks on the defenseless Byzantine Empire, which his descendants would ultimately go on to conquer.

*Some scholars have debated that Osman’s original name was Turkish, presumably Atman or Ataman, and was only later replaced to ʿOsmān, of Arabic origin.

The earliest Byzantine origins, including Osman’s contemporary George Pachymeres, spell his name as Ατουμάν (Atouman) or Ατμάν (Atman), whereas Greek sources frequently represent both the Arabic form ʿUthmān and the Turkish variant ʿOsmān with θ, τθ, or τσ. An early Arabic source introducing him also writes ط rather than ث in one example. Osman may consequently have adopted the more prestigious Muslim name later in his life.

Osman I had a familiar relationship with a local ethical leader of dervishes named Sheikh Edebali, whose daughter he married. A story appeared amongst later Ottoman writers to describe the relationship between the two men, in which Osman had a dream while being in the Sheikh’s house.

The story emerges in the late fifteenth-century history of Aşıkpaşazade as follows:

He saw that a moon appeared from the holy man’s breast and came to submerge in his breast. A tree then germinated from his navel, and its shadow compassed the world. Below this shadow, there were mountains, and waters flowed ahead from the foot of each mountain. Some people drank from these flowing waters, others sprinkled gardens, while yet others created fountains to flow. When Osman waked, he told the story to the holy man, who said ‘Osman, my son, congratulations, for God has given the imperial office to you, and your descendants and my daughter Malhun shall be your wife.

*The dream grew an essential foundational myth for the empire, imbuing the House of Osman with God-given authority over the earth and providing its fifteenth-century audience with an explanation for Ottoman success.

The dream story may also have helped as a kind of the compact: just as God vowed to provide Osman and his descendants with supremacy, it was also implied that it was the responsibility of Osman to present his subjects with prosperity.

The Sword of Osman

The Sword of Osman was an essential sword of state used during the inauguration ceremony of the Ottoman Sultans. The tradition started when Osman was girt with the sword of Islam by his father-in-law Sheik Edebali. The engirdle of the sword of Osman was a necessary tradition that took place within two weeks of a sultan’s acceptance to the throne. It took place at the tomb complex at Eyüp, on the Golden Horn waterway in the capital Constantinople.

*The truth that the emblem by which a sultan was crowned consisted of a sword was profoundly symbolic: it showed that the duty with which he was entrusted was first and foremost that of a warrior.

The Sword of Osman was fastened on to the new sultan by the Sharif of Konya, a Mevlevi dervish, who was recalled to Constantinople for that purpose.

In 1302, after soundly crushing a Byzantine army near Nicaea, Osman started settling his troops closer to Byzantine dominated areas. The huge number of Ghazi warriors, Islamic authorities, and dervishes commenced living in Osman-dominated regions, and migrants formed the bulk of his army. The entrance of Ghazi warriors and explorers of differing backdrops into these lands drove succeeding Ottoman rulers to title themselves “Sultan of Ghazis.”

Terrified by Osman’s expanding control, the Byzantines deliberately escaped the Anatolian countryside and committed their resources to the Navy rather. Byzantine leadership was circumscribed to restrict Osman from passing into Europe and strived to contain Ottoman extension westward. Osman, however, proceeded to press westward and caught the Byzantine city of Ephesus near the Aegean Sea. Moreover, strengthened by the entrance of migrants into his empire, Osman also went eastward and took Byzantine domains in the Black Sea region of Anatolia.

*Osman’s last crusade, before falling of old age, was against the Byzantines in the city of Bursa. Although Osman did not physically compete in the battle, the victory at Bursa determined to be notably vital for the Ottomans as the city served as a staging ground versus the Byzantines in Constantinople, and as a newly embellished capital for Osman’s son, Orhan.

Kuruluş: Bozdağ Osman– The TV Series Based on the Life of Osman I
The Real History Of Ertugrul
Comment